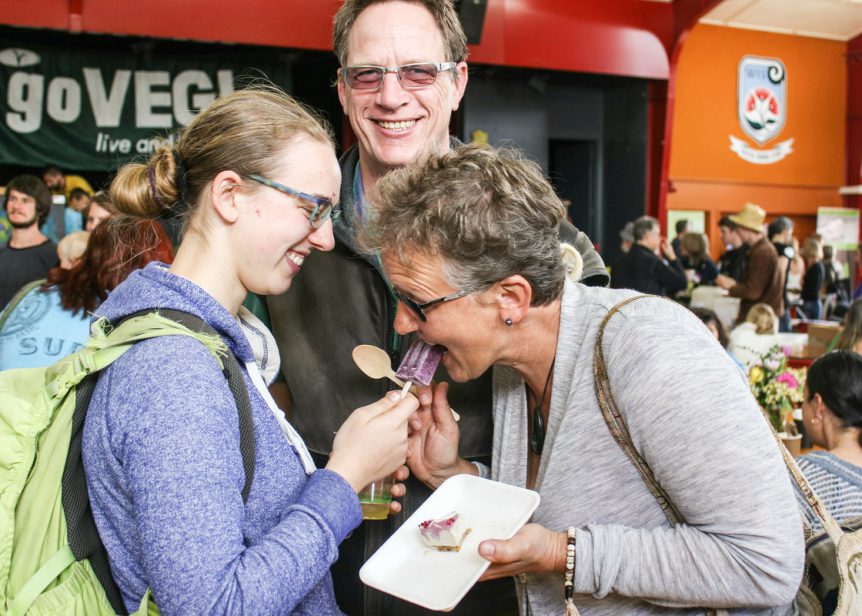 How many people are interested in veganism in Christchurch? Heaps judging by the overwhelming turn out at Christchurch’s first Vegan Expo on October 8th.The Christchurch Vegetarian Centre has been running the festival since 2007 under the name ‘Vegetarian Expo’. The event has been vegan since 2012 but has only this year been titled ‘vegan’ with a complete rebranding and refresh under this new name. Another big change was the step up to a professional event location at the Airforce Museum Wigram.

Long entry queues started forming well before the opening and went on all day only reducing towards the end of the event. Entry numbers were massively higher than any of the previous expos. Star guest, Masterchef NZ 2013 winner Aaron Brunet was a definite drawcard – he spoke about the expo on TV1 News who were covering the event as did the CVC spokesperson Mel Patterson and Alice Shopland from Angel Food.

Other expo presentations included topics ranging from health, nutrition, Eat Kind and how to be a vegan activist. Meanwhile, in the always busy cookery demonstration room, dishes such as waffles, soup and vegan ‘butter chicken’ were demonstrated and tasted with take home recipe sheets. Films played all day, there were kids activities and live music from the Praesto Quartet.

The 50 stall holders included many CVC community groups who were busy all day handing out resources, signing up emails to our weekly recipe and notices email newsletter and various social groups plus selling Revive cookbooks, reusable produce bags, vegan marshmallows, soya yogurt starters, raffle tickets and other vegan fundraising items. The vegan goody bags stuffed with donated goodies were incredibly popular and sold out by lunchtime. The NZVS stall was also popular and was staffed by Wellington branch members who came down specially to help as the local crew were so busy running the event. And of course, there were many stalls selling a range of great foods and products plus not for profit vegan groups and charities such as SAFE, NZVS and CARA.

Such an unprecedented response shows the tremendous interest in a plant based diet and vegan lifestyle. Almost all the major veg festivals internationally are now called vegan or cruelty free and not called vegetarian. We hope other centres around New Zealand will also hold vegan festivals and we are on hand to willingly share expo knowledge, resources and inspiration.